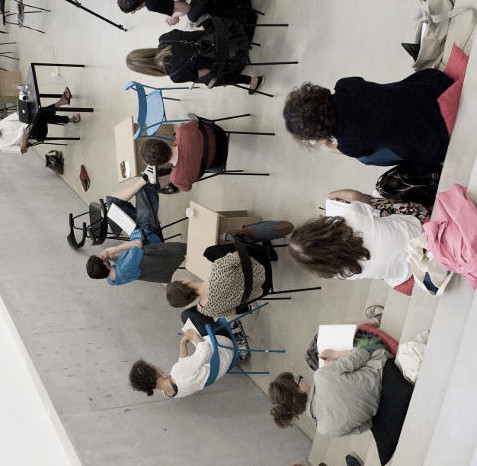 ŠUM collaborated with the  “Neteorit” in 2013-15 in terms of co-organizing the research modules focusing on contemporary art.

NETEORIT was a self-organized program of lectures, talks and debates related to art, theory and politics  that took place mainly in Moderna galerija (MG+MSUM), that supported the program by offering museum spaces and some facilities free of charge.

Neteorit was run by various collectives and individuals (artists, philosophers, students,  activists)  who organized it according to their interests and needs. Most events were open for public and there was no entrance fee. Because the program rarely received public funding, it was  largely dependent on voluntary and unpaid work of the members of the group.

From 2013 till 2015 two primary research modules (philosophy and art) were formed and several reading seminars and lectures organized:

More or less actively involved individuals (Kaja Kraner, Tjaša Pogačar, Iza Pevec, Anja Zver, Domen Ograjenšek, Izidor Barši, Aleš Mendiževec, Andrej Škufca, Jernej Kaluža, Tomo Stanič in Matej Rudolf) are today regrouping, reconnecting and working in many other constellations, projects and spaces. Neteorit was a sum of different activities of a non-homogeneous collective and as such only one of the experiments made by mentioned individuals who try to organize their own context and conditions of working.

Some of the members of Neteorit and ŠUM presented both platforms in the seminar in  Negotiating institutions. The seminar was held in Tate Liverpool and organized by the confederation of museums L’Internationale.

Also a small contribution/intervention in to the exhibition Crises and New Beginings at the Museum of Contemporary Art in Ljubljana (MSUM) was made by some of the members of now former selforganized collective Neteorit, that was active also in MSUM since 2014. They tried to raise some questions about the role that this kind of (non)artistic practices (the so called “constituencies”) play in the exhibitions of contemporary art, and about the conditions of their involvement with institution that hosts them. Especially about the inconsistencies that define this kind of “collaborations”. more info HERE