Domen Ograjenšek: No, I don’t Cry on the Outside Anymore 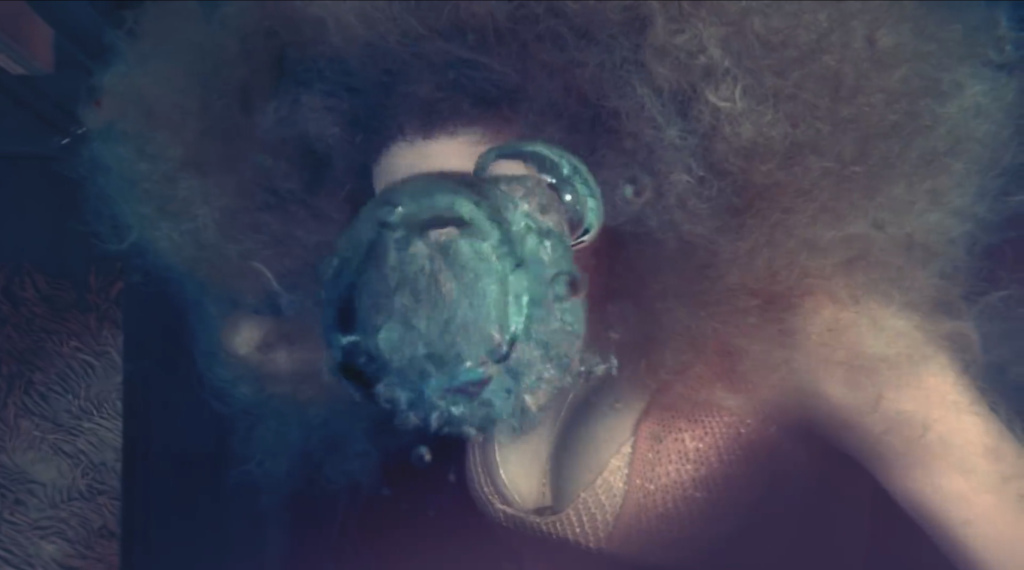 “Why does every [pop] intro sound like it’s underwater?” This was recently the topic of a popular podcast Switched On Pop, where they discussed the drunken (low, deep, and muddy) sound that can be heard in the intros of Arianna Grande, Halsey, Kendrick Lamar, and the like. The effect is produced by muddying the crisp digital recording with layers of artificial tape hiss, vinyl wobble, even VHS noise, and can be traced back to the early projects of Frank Ocean, Kendrick Lamar, and the general re-introduction of jazz to hip hop, when jazz guitar progressions, vinyl crackles, etc. were becoming the new norm.

To spare you the details, what the underwater effect described above introduces, in general, is an autonomous quality that strays away from the precise, even methodical construction of pop formulas, and thus opens up the songs, or singles, to an aesthetic contingency that mellows the usual high-energy kick that pop is known for.

The muffled sound establishes a landscape of a rather muted expression, where affects are condensed into a tangible and malleable form—as if awaiting a reworking, an emergence of subjectivity that would be able to sense itself. This is why the intros feel self-indulgant and distant, like they’re encroaching upon themselves. That being said, it would nevertheless be misleading to give the impression that as such, the muffled sounds gain any sort of considerable agency or autonomy. As a fetishised subjectivity disguised as “object-hood”, they rather echo the facilitating demise of the general pop consciousness, tuned in and awaiting the final lullaby of the consumerist downturn.

However, not a single tear is shed. In stark contrast to the angsty vibes of Seapunk or Seagrunge, the downturn is rather warm, soft, and gooey; a phase of clearing the mind, recalibrating the broken-down subjectivity, where just like with Laura Linney in the Showtime series The Big C, the final jump in the pool—that her fast-pace, lower-middle-class lifestyle prevented her from building, or more accurately from having it built, but now, faced with terminal cancer, and the realisation that there is no “after” this or that project, no “after” this or that hectic year, it becomes her final and most personal goal on her bucket list, and after achieving it, after all the struggles of dealing with her family, business, and failing health, she jumps in, into it, fully clothed, giving in, giving the impression that she’s finally giving up, diving into her eternal slumber, even though under the water, submerged, isolated from the echoing voices she actually finds peace and serenity—brings about aquatic zen.

These waters are just not those of the movie Jaws, no feeling of dread when faced with the impenetrable darkness of their depths. Instead, they echo the bright blue colours of suburban pools, monochrome and devoid of the dangers of predatory co-inhabitants. Underwater, metabolising the oxygen of your last breath, using up the last traces of your past terrestrial life, shutting down your consciousness, giving in, you finally get out of your head and become part of the flow. Your thoughts become sonar pulses, searching for the other that you already know is not there, and this completes you, infuses you with a calming melancholy that normalises the pressures of your new aquatic capitalist environment. You find yourself, even if this self is a bit drowsy, oxygen-deprived, your new Ambien-self. 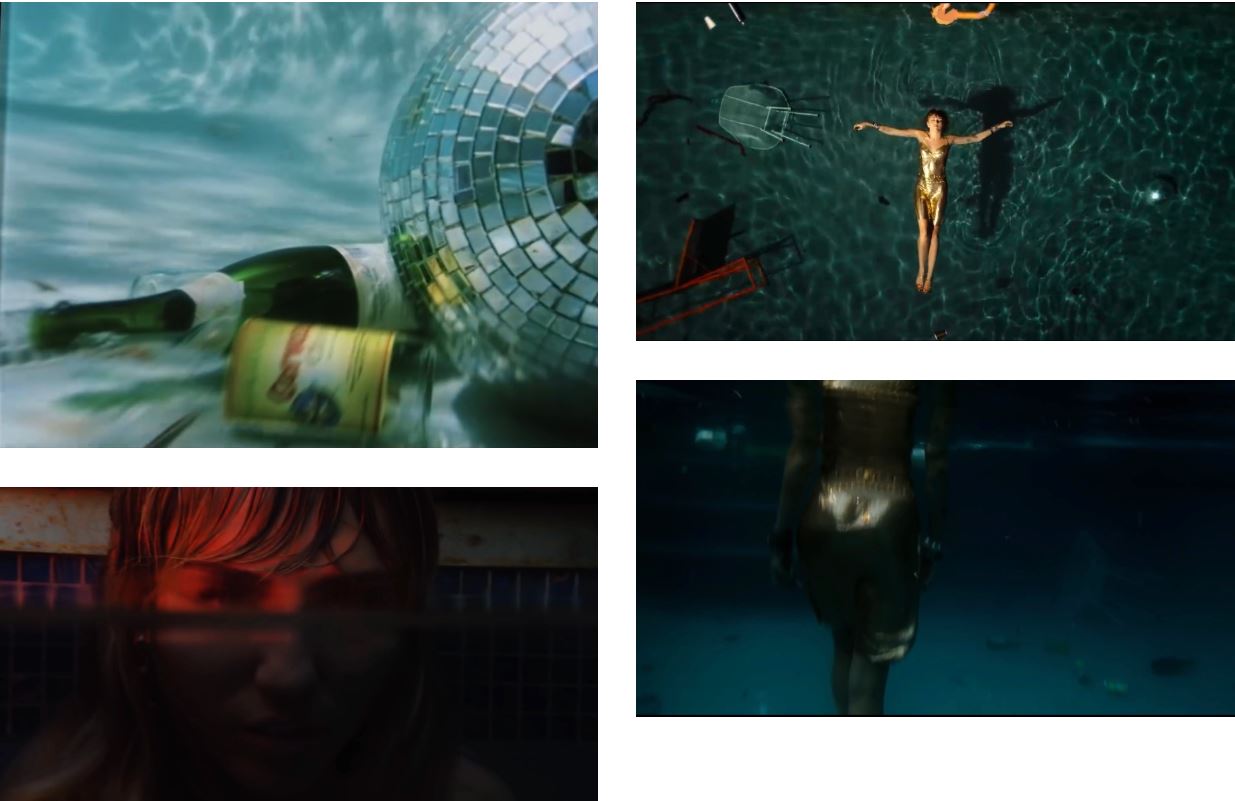 It’s strange to think that underwater we all mumble rap, sound travels differently than on terrestrial planes. But what are we even mumbling about? When all that is left are the confines of our inner selves, the underwater murmurs evoke a speech that fails to establish any kind of intersubjectivity. What it evokes is rather a solipsistic space of self, a shivering depository of vibrations and sonic waves that set and strengthen the fragile foundations of our personal headspace.

This is what gives the aquatic experience its peculiar sense of zen. Yet this zen-like state is not without a trace of anxiety. With no land in sight, just the monochrome, empty body of water, the fragmented thoughts, the dwindling traces of consciousness, its last sonic waves that still search for the borders that could outline the territorial waters of our personhood, are all but in vain. We all know it. We all sense it at those crucial existential moments when we can no longer avoid that creeping sense of our bodily waters turning against us. After all, we know that we are more than 50% water, and water knows no borders, knows no allegiance. Can we trust it? Can we really trust ourselves?

But this transitional moment of doubt is, alas, only intermediary, interrupted by the inevitable spasming of our bodies, by the insatiable desire of our lungs to get a nice deep breath of chlorinated water. After that, there is no other choice than to give in. To denounce our short-lived amphibian existence.

Air is redundant. Water is life. 💦

This moment and act of “giving in” should not be considered only along the lines of a defeatist acceptance of capitalism and its intrinsic values. Sure, there is an economic frame to all these breakdowns that coincidentally occur in the immediate vicinity of and in relation to the suburban backyard swimming pool—the well-known symbol of prosperity of the American middle class—yet what is at the centre here is rather a re-shifting of the core—of the essence in the traditional philosophical sense—that now acts in favour of that which physically dominates within our bodily constitution: water.

The body has already sided with underwater life—it comforts and calms you as you drift underwater. It is only the mind that clings to your previous terrestrial existence, that gasps for air, that craves for the stubborn draft of reason.

Yet the body is organised and well equipped to drown the mind nonetheless, to blow out the last flame of consciousness, and swimming pools are its training pods—the infrastructure for a potential organisational entity that would be founded and managed solely within the scope of the limbic, moody, anxiety-driven part of human behaviour, where organisation already gives way to swarming: swarming towards the watery depths, training in the pools, not knowing, only centring, re-centring, re-calibrating, and meditating through the breakdown, unknowing, unconscious, led only by instinct, intuition, and the will to survive.

Nonetheless, there is logic to all this madness: anxiety, mood disorders, and mental breakdowns are all tools for a future mass underwater migration that our bodies will take advantage of to counter the alienating endeavours of our consciousness. At least so it seems, at least so it makes sense within the fantastic frame of our collective imaginaries that permeate Pop culture with cringe-worthy yet consistent imagery. 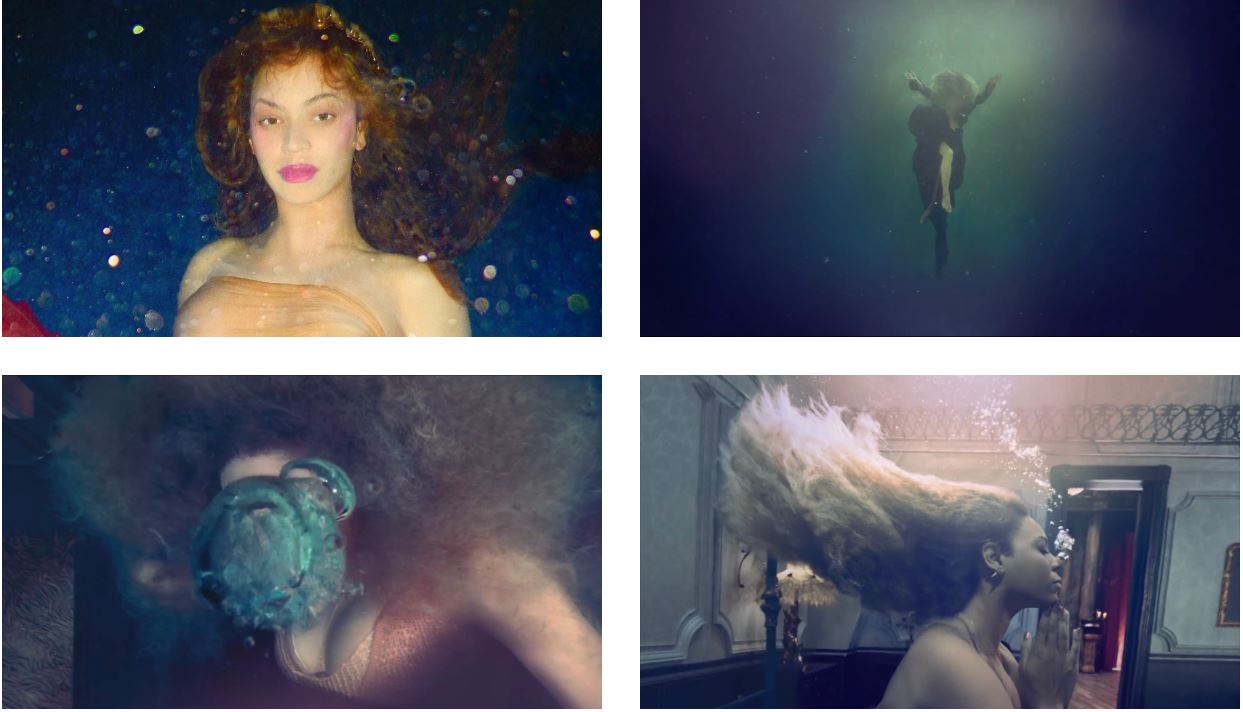 Looking at this visual material (Fig. 6) we can easily imagine a future deep-sea expedition of a currently unknown civilization that encounters the watery ruins of our society, and amidst the rubble, amidst the sea critters that have re-shaped and re-possessed it, stumbles upon a strange figure, standing stoically in the darkness, still there, for who knows how long, with what means—just calm, zen-like, and collected. If anyone can pull that off, it is definitely Beyonce, the queen B, our future underwater representative to all alien cultures and forms of life.

However, to imagine this is to already feel the burning in your lungs, to hear your future homeland calling upon you, messing with your sense of nostalgia for something you never really knew. That is the paradox of the Origin, be it the future subaquatic homeland or the primordial soup: the pre-historic and post-historic already merge in your microbial present and you know that the only thing left to do is … to turn off the lights, lights off, to blow out the candle, consciousness no more.

This is no mere fiction, mess up your metabolism, let the critters in your small intestine go rampant, and then see how much of you is really in charge here, who is really steering the ship, I dare you. It’s shocking when you figure out for yourself how much of your emotional and cognitive stability depends solely on you not going to McDonald’s at 1 AM; how much of it can get messed up by a single burrito.

Just think of the time Ariana Grande licked a doughnut that she did not intend to buy and almost immediately lost the trust of the American public. There is nothing more alienating then connecting with your audience on a microbial level. 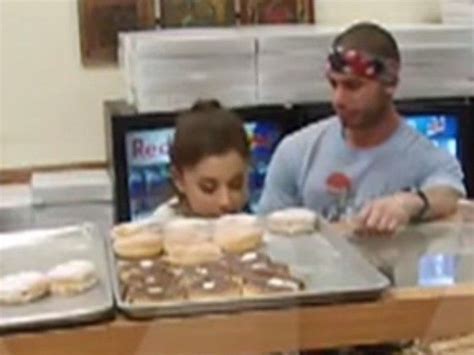 If we want to talk about the Ambien-self of current pop music, we need to acknowledge that it does not have a lot to do with “chill”. It’s not that everyone has just been a bit laid back recently. Let’s not kid ourselves, “chill” does not even exist. Fake news. Instead, it’s rather a precursor to what could be called “microbial pop”, pop for the small intestine, your true heart and soul. Because when you really cry, you don’t cry on the outside, and even if you would, your future aquatic home would render it redundant—what is a salty tear to the ever-expanding sea anyway.

The muffled, moody sound gives you a glimpse into the muffled, ear-less existence of your microbial self. A glimpse into the emotional resonance of your gut constituency that encourages you to binge on 10 seasons of Friends before your free month of Netflix runs out, to send nudes to strangers you have no interest in, to cry in the bathroom stall at your part-time job, and to still cling to that high school part of you that you’ve spent so many years trying to leave behind.

No chill, chill is for the boomer elites. What we have is sweet, soggy, addictive cringe. Lean in to the cringe. Don’t fight it. Let go. Give in. You know you want to. You can already feel your oesophagus tightening, your digestive juices overflowing your windpipes, filling your lungs. Is it anxiety? Or is this your aquatic, microbial self coming out of the closet, transforming your lungs for underwater use? Either way, you’re too drugged up or burned out, broken down to know the difference. But your body does. And your body’s a drifter, yearning for the aquatic embrace, for the first chance to drift away, to disperse into microbial bits that already swarm your spirit, evoke it, and speak through it—it is difficult to grasp, yet there is no underwater love, no underwater sound of contemporary pop without the microbial ventriloquism of humanoid personhood that goes with it, no pop consciousness without its animal spirits.