It’s always risky (and even reductive) to entrust the revolutionary potential to one group or identity – be it the proletariat, amazons fostered in our midst or trans or queer community. The starting point of this collection of essays published by Literaria Pragensia Books and edited by Vít Bohal is therefore to go beyond, or at least broaden the notion of identity formation and to theorise trans* (coupled with xeno*) as a non-reified site of exploration or a vector of possession/navigation. The production of new non-binary, trans or queer identities and, for example, new internet subcultures obsessed with everything artificial and abstract, signals a possibility for a new kind of systemic transduction and points to the broader site of intervention that is infrastructural, cosmological and speculative in nature. In line with Sadie Plant’s non-linear feminism of the 90s and Mark Fisher’s neuropunk of the 00s, trans* migrations explores the notion of identity as a cybernetic ecology or a database, and outlines the need for a new understanding of the topoanalytical construction of the system – the inhuman.

The vector of critique in trans* migrations is explicitly aligned against the reproductive realism of the current system; i.e. the normative naturalism, the lack of queer temporalities and the disinterest in the amorphous potential of xeno* individuation. In broad strokes, there are three different theoretical and methodological positions that occupy these pages, beginning with the libidinal materialist take on trans* which outlines the immanent subversive potential of (trans)women. The lack of subject position within the transcendental patriarchal order enables them to be more like commodities, more like machines, and therefore more aligned with the impersonal, immoral and immortal drives of the future. N1X and Alexandra Chace outline the shift in the subject and object position in the capitalist economy and identify the latter as the site for the immanent production of the real. In these two essays the trans* is equated with letting go, abandoning our anthropod security apparatus and embracing the demonological vector of possession as a site for experimentation.

The crucial difference between the first and second vector lies in a different understanding of the subject position and the function of critique – what exactly is to be critiqued? The distinction is primarily about the difference between the epistemology of possession and the epistemology of construction or what is to be done in relation to the cyberpositive tendencies of the system. If N1X and Chace retain the Kantian framework and the distinction between the subject and the object or between the inside and the outside, other contributors, epitomized by German Sierra’s essay Morphological Debt, delve more explicitly into the cybernetic landscape in order to excavate the system’s technological unconscious and reshape/restructure it in a more speculative and plastic way. Here we encounter, if we follow Reza Negarestani, a new understanding of the system where epistemology precedes ontology and where we first have to know ourselves in order to be able to change ourselves. This, then, is the update of the non-linear feminism of Sadie Plant that is now less about cascading (horizontal) processes and more about spatial (multi-level) assemblages and functional integration and manipulation of the abstract functions within them.

Furthermore, because the motor of capital oscillates between the production of hyperplastic identities on the one hand and commodified and captured versions on the other, a more thorough ungrounding of the system is needed. This is the reason why in trans* migrations we find different attempts to go beyond the D&G’s notion of deterritorialization and reterritorialization. Or in Bohal’s words: »The xeno* instantiates the architecture of territorialization as such.« This newly established orientation enables us to make a more convincing immanent critique of the system, and to challenge the existing protocols from within – through the emphasis on the abstract functional integration that can be repurposed and reconstructed for different ends. In other words, the whole point of talking about trans* and xeno* is to point out the possibility for »an empowering underdetermination«[1] of the system’s new capabilities, and in order to unlock them, it’s not enough to fight this battle only in the discursive or aesthetic field, but more so to use its own internal logic to hack the system from within.

The third vector we find in trans* migrations is linked to the various strands of posthuman philosophy and theorising the Planetarity, or, more specifically, to unexplored potentialities regarding a different understanding of the human and nature and the way in which this can affect our abilities of intervention. Not only are these conceptual innovations relevant because they’re hard to swallow for the existing systemic constellation, but they also help us make explicit the connection between raising the system’s self-consciousness (e.g. technological unconscious) and the need for new kinds of frameworks regarding our relationship to the planet Earth – this is especially evident in the essay by Purkrábková & Sirůček entitled Posthuman Ufology and the Construction of a Radical Cosmic Subject where the duo attempts to combine a deep ontological framework of the posthuman philosophy, using Karen Barad’s approach as an example, with the need for a better conceptualisation of the human as a lifeform.[2] Or to highlight a quote by Jennifer Gabrys: »The genre of the human must be expanded so that other less destructive modes of being human – and being planetary – might be formed.«[3]

What trans* migrations bet on is therefore to not only expand the notion of trans* (coupled with xeno*) and make it infrastructural, but to understand, as Susan Stryker suggests in Transgender History, the human as a »movement […] away from an unchosen starting place, rather than any particular destination or mode of transition.«[4] 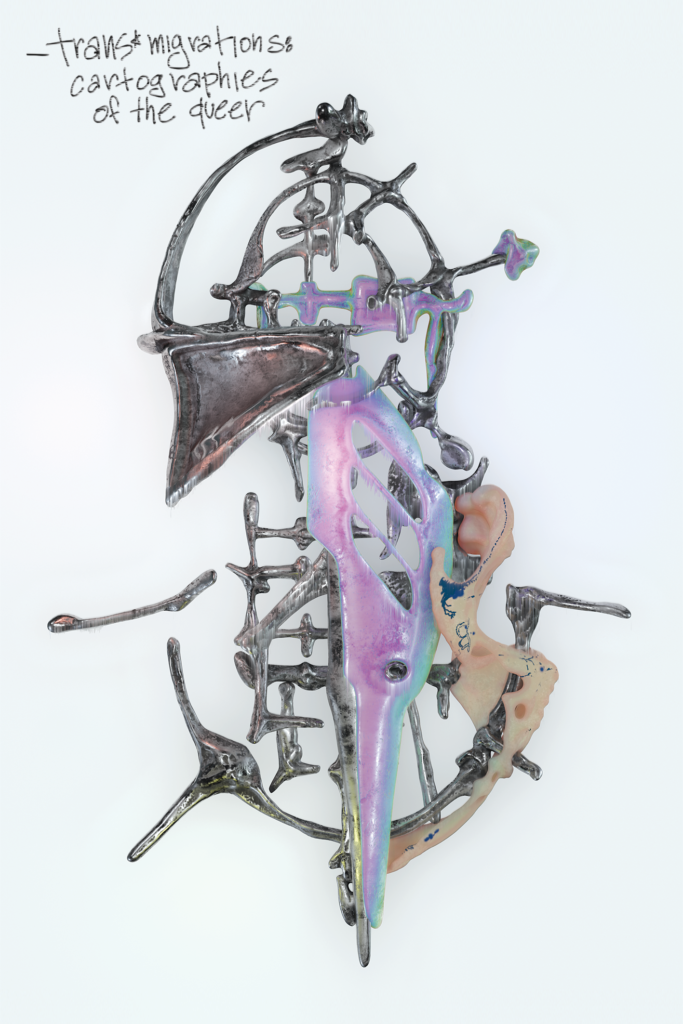 trans*migrations: cartographies of the queer

(Cover and graphics by BCAAsystems)